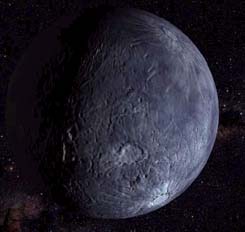 This is an artist's impression of the icy Kuiper belt object 2002 LM60, dubbed "Quaoar" by its discoverers.
Click on image for full size
Courtesy of NASA and G. Bacon

A new object has been found within the solar system. It is the largest object to be found since Pluto was discovered in 1930! Scientists Michael Brown and Chadwick Trujillo from the California Institute of Technology discovered the distant object with the help of a ground based telescope and the Hubble Space Telescope.

The scientists are calling their discovery Quaoar. At 4 billion miles from Earth, and over 1 billion miles from Pluto, it is the furthest object in the solar system ever to be seen with a telescope. Like Pluto, Quaoar is located in the Kuiper Belt, an icy field of debris extending 7 billion miles beyond Neptune. Quaaor is the second largest object in the Kuiper Belt at about half the size of Pluto. Unlike Pluto, Quaoars orbit around the Sun is nearly circular. Scientists Brown and Trujillo suggest that it is probably made up of a mixture of ice and rock.

It may surprise you, but astronomers don't really have a good definition of a "planet". Because of this, Pluto is at the heart of a controversy about its status. Is Pluto a planet, or isn't it? Scientists...more

There are many icy and rocky planetoids on the outer edge of our Solar System. As a group, all bodies that orbit, on average, further from the Sun than the 8th planet Neptune are called Trans-Neptunian...more

Pluto demoted - no longer a Planet!

Pluto has been officially demoted from its status as a planet. The International Astronomical Union (IAU), at a meeting in August 2006, voted on their first "official" definition of a planet....more