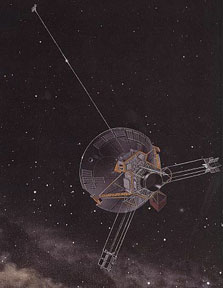 NASA scientists were unable to detect a signal from Pioneer 10 when they tried to contact the spacecraft on February 7, 2003. They believe Pioneer 10's power supply doesn't produce enough energy anymore to power the spacecraft's radio. The last signal received, on January 22, was very weak.

Pioneer 10 was launched from Earth in 1972. It was the first spacecraft to pass through the asteroid belt, and the first to visit Jupiter and take close-up pictures of the largest planet in our Solar System. Pioneer 10 was supposed to last long enough for a 21-month mission. As it turned out, the spacecraft sent signals back to Earth for more than 30 years!

The last signal from Pioneer 10 came from more than 12 billion kilometers (7.6 billion miles, or 82 AU) away. At that distance, radio signals from Pioneer 10, traveling at the speed of light, took more than 11 hours to reach Earth. The spacecraft is headed out of our Solar System; it passed the orbit of Pluto in 1983. It is going in the general direction of the star Aldebaran in the constellation Taurus. Pioneer 10 will reach Aldebaran, which is 68 light-years away, in about 2 million years. The spacecraft carries a gold plaque with information about Earth; just in case "somebody out there" finds it!

The many Pioneer missions were designed to study our Sun's environment and the planets. Although some of the launches failed, the Pioneer program can still be considered a success. Pioneer 1 was launched...more

Asteroids are small bodies that are believed to be left over from the beginning of the solar system 4.6 billion years ago. They are rocky objects with round or irregular shapes up to several hundred km...more

What's in a Name: Arabic for "Follower" because it rises after the Pleiades. The Pleiades is a group of 6 stars traveling together through space. The eye of the constellation Taurus, the bull. Claim to...more

Taurus is commonly known as The Bull. It passes through the sky from November through March. Taurus was a very popular constellation in ancient times, so there are many myths about it. The Greeks thought...more

NASA scientists were unable to detect a signal from Pioneer 10 when they tried to contact the spacecraft on February 7, 2003. They believe Pioneer 10's power supply doesn't produce enough energy anymore...more

The Mars Exploration Rovers (MER) are on their way to Mars. MER are two robotic rover vehicles that will explore the Red Planet. Spacecraft carrying MER blasted off from Cape Canaveral in Florida. The...more