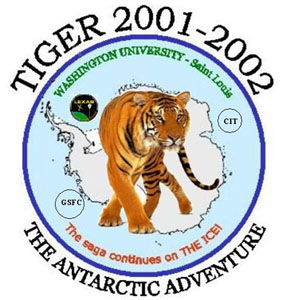 This is the official logo of the TIGER instrument launch, 2001-2002. TIGER was launched onboard a balloon in December 2001 and landed back in Antarctica in January 2002.
Click on image for full size
Courtesy of NASA in collaboration with Washington University, Caltech and the University of Minnesota

Questions and answers about the TIGER mission in Antarctica

An image of TIGER on the launch pad in Antarctica

The TIGER instrument was launched on a helium-filled balloon on December 20, 2001. When it landed 31 days and 20 hours later on January 21, 2002, it had broken all records for long-duration balloon flights! The best record before this was 26 days set in January 2001. "We are excited with the duration of this flight, which allowed the scientists to get ample science to perform their studies," said Steve Smith, Chief of the Balloon Program Office at NASA Goddard Space Flight Center's. "We routinely have long- duration balloons that float for up to two weeks, but to have one flight last for over 31 days is very rewarding."

The balloon carrying TIGER was launched from McMurdo Station, Antarctica. TIGER stands for the Trans-Iron Galactic Element Recorder experiment. The balloon rose to an altitude of approximately 125,000 feet (38,100 meters). The inflated balloon at this point was about 424 feet (129 meters) in diameter and over 555 feet high!

For the 31 days, the balloon permitted TIGER to search for the origin of galactic cosmic rays, atomic particles that travel through the galaxy at near light-speeds and shower the Earth constantly. "The importance of TIGER is that it is the first experiment that has both sufficient collecting power and adequate resolution to measure abundances of all nuclei from iron through zirconium," said TIGER Principal Investigator Robert Binns, Washington University. "This will enable us to determine whether the cosmic-ray source is hot or cold, gas or solid. We have already seen in our quick-look analysis of flight data that Tiger's resolution is sufficient to resolve those nuclei."