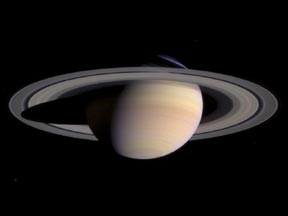 This picture of the planet Saturn was taken in March 2004. The picture was taken by a spacecraft called Cassini.
Click on image for full size
Image courtesy NASA/JPL/Space Science Institute.

Thursday, May 6th, is Space Day. Space Day is a time for people who are interested in space to learn more about it and to go to fun events about space. The first Space Day was in 1997.

If you want to find out more about Space Day, go to the Space Day web site. It will tell you whether there are any Space Day events going on near you!

Thursday, May 6th, is Space Day. Space Day is a time for people who are interested in space to learn more about it and to go to fun events about space. The first Space Day was in 1997. If you want to find...more