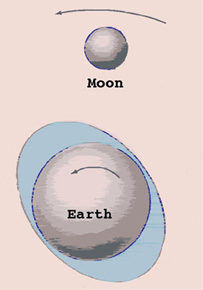 It's not a question of mass, but of energy! The tidal force exerted by the Moon on the Earth causes the oceans to bulge. The Earth rotates about its axis faster than the Moon revolves around the Earth, and this rapid rotation carries the tidal bulge of the oceans forward of the Moon in its orbit. So the tidal bulge on the Earth is always slightly ahead of the Moon's own position. This bulge is continuously tugging the Moon forward, increasing the Moon's total energy. Imagine a cowboy's lasso. As the cowboy spins the lasso faster and faster (increasing its total energy), the loop gets wider. The same thing essentially happens to the Moon. The tugging of the Earth's bulge lifts it into a wider orbit around the Earth.