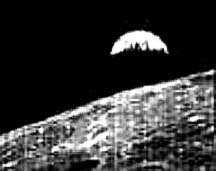 Webster's defines a "period" as "the completion of a cycle, a series of events, or a single action". With reference to the motion of planets and moons, a period can be defined in a couple of different ways. The "rotational period" of a celestial body is the amount of time required for it to complete one turn, or rotate on its axis. On Earth, we call this cycle a "day". Earth's day is exactly 23.9345 hours (23 hours, 56 minutes, 4.2 seconds). Mars' day is a little longer, at 24.6229 hours. The Moon is much slower, it takes 655.728 hours (27.322 days!) to complete one turn on its axis.

In addition to rotational movement, the bodies in our solar system also move around, or orbit, other bodies. Planets orbit the Sun while moons orbit their respective planets. The amount of time required for a body to complete one orbit around another body is therefore referred to as an "orbital period", also called a "revolutionary period". On Earth, we call this orbital period a "year". Our year is 365.256 days. On Mars you'll get a lot more time between birthdays since it takes 686.98 days (Earth days, that is) to complete one orbit about the Sun.

Since the Moon's orbit centers on the Earth, rather than the Sun, it would be misleading to think of the Moon's orbit as a "year". Instead, this cycle of the Moon orbiting the Earth more closely approximates our system of calendar "months". It takes 27.322 days for the Moon to orbit the Earth. If that number looks familiar, it's because the orbital period of the Moon is exactly the same as its rotational period. This is the reason we can never see the far side of the Moon from Earth--it's always facing away from us.