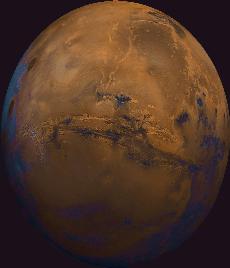 Valles Marineris, the grand valley of Mars named after the Mariner program which first took close-up images.
Click on image for full size
Image from: USGS

Valles Marineris is a large system of canyons, shown in this image, that stretches 4000 km (2500 mi) along the equator of Mars. It was first imaged in detail by Mariner 9. The scene to the left (centered at: lat -8, long 78) shows the entire Valles Marineris canyon system, over 2000 kilometers long and up to 8 kilometers deep. This system extends from Noctis Labyrinthus (check the large topographic map of Mars) - the arcuate system of grabens to the west, to chaotic terrain to the east. As can be seen in the image, many huge ancient river channels originate at chaotic terrain, from north-central canyons in the image, and extend north. The three Tharsis volcanoes (dark red spots), each about 25 kilometers high, are visible on the leftmost (western) edge of the image. To the south are the highlands; very ancient terrain, covered by many impact craters.

What causes a Planet's surface to change?

Over the course of time there are many things which can cause the surface of a planet to change its appearance. winds can slowly wear erode a planet's surface. The surface of Mars is affected by wind....more

This is an example of the cratered terrain on Mars. Almost the entire surface of Mars is cratered to various degrees. The Tharsis Ridge, where the volcanoes of Mars are located, is lightly cratered. The...more

An Overview of the Mars Global Surveyor Mission

The mission of Mars Global Surveyor (MGS) is to map the surface of Mars from space, a mission somewhat akin to the Magellan mission to Venus. The MGS probe is also suppose to explore the topmost portion...more

This view of Valles Marineris shows debris-filled gullies with intervening rocky spurs, reminiscent of terrestrial canyons. Layered rocks on Earth form from sedimentary processes (such as those that formed...more