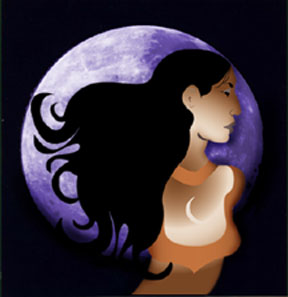 Ix Chel, the "Lady Rainbow," was the old Moon goddess in Mayan mythology. The Maya people lived around 250 AD in what is now Guatemala and the Yucatan in Mexico. Mayans associated human events with phases of the moon.

Ix Chel was depicted as an old woman wearing a skirt with crossed bones, and she had a serpent in her hand. She had an assistant sky serpent, whom they believed carried all of the waters of the heavens in its belly. She is often shown carrying a great jug filled with water, which she overturns to send floods and powerful rainstorms to Earth.

Her husband was the benevolent moon god Itzamna. Ix Chel had a kinder side and was worshipped as the protector of weavers and women in childbirth.