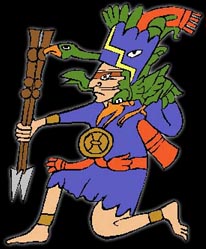 The ancient Mayans used the doorways and windows of their buildings as astronomical sightings, especially for the planet Venus.

At Uxmal, all buildings are aligned in the same direction. Surprisingly, Mayans knew the motions of Venus with much accuracy.

Venus, the morning star, was the patron planet of warfare. Many offerings were made to Venus and the Sun.We know from a historian that people would stop up their chimneys so that no light from Venus could enter their houses and cause harm.