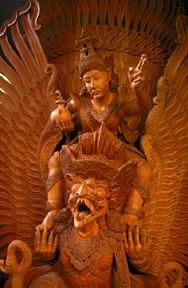 In Vedic mythology, Garuda is the king of birds and the enemy of serpents. His body was that of a handsome man with the beak and the talons of a predatory bird. He is associated with the all-consuming sun's rays. Garuda is often depicted with the supreme Hindu god Vishnu and his wife Lakshmi riding on his back flying across the sky.

His father was Kasyapa, one of the seven great sages called the Rishis. Hindu people believe that he has the power to cure those suffering from snake-bite. In one myth, it is said that Garuda stole the water of life, named Amrta. Garuda needed the Amrta to release his mother Vinata, who had been enslaved by her rival Kadru with a subterfuge.

Kadru had asked the elixir of immortality as a ransom. The water of life was the ambrosia of the gods and it was carefully guarded in Indra's heaven. The task appeared impossible to him. Nevertheless, Garuda succeeded and won his mother's freedom. Indra had his thunderbolt broken during the battle.