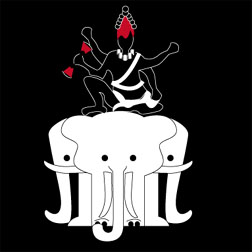 In the Rig Veda, which is a collection of antique Hindu hymns, Indra is described as the king of the gods. He has authority over the sky and the power to make rain using his weapon, the thunderbolt. Indra is depicted as a man with four long arms riding a white elephant. He is the god of battle. Before each battle, he becomes intoxicated with a divine drink of mysterious origin called soma.

Indra's indulgence in drinking soma makes his belly a disproportionate size. It is said that the juice, soma, empowers him to accomplish his mythological tasks. Indra's major attribute is his strength. He is the heroic figure responsible for slaying the serpent Vritra.

Vritra had swallowed the cosmic waters bringing a tremendous drought in the world. Indra split the belly of the serpent with his thunderbolt releasing the waters and generating life. Unfortunately, the approval for this episode is shadowed by other humiliating stories, like the seduction of Ahalya. Ahalya was the wife of the sage Gautama. To seduce Gautama's wife, Indra dressed himself as the sage and went to Ahalya's house to have intercourse with her.

The woman recognized the king of the gods but she accepted him anyway. When Gautama found out about the adultery, he cursed his wife and the king of he gods. As a result of the curse, Indra lost his testicles and Ahalya had to live in hermitage. Indra was a parallel of the Greek sky god Zeus.