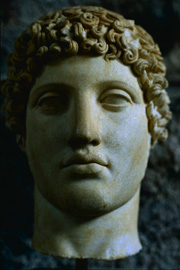 Head of Hermes. Statue of the 2nd century A.D. from Turkey.
Click on image for full size
Image courtesy of Corel Corporation.

Hermes was the messenger-god of Zeus, and was the god of games, of business, and of story telling. He was the offspring of the god Zeus and the goddess Maia. Maia herself was the daughter of the titan Atlas. Hermes was known to the Romans as the god Mercury.

Hermes loved to play tricks on gods and people. Once, he stole Apollo's cattle by making them walk backwards. This way, their footprints made it look like they were walking away from their hiding spot. Hermes showed Apollo where the cattle were, and they became good friends.

Pan is the son of Hermes.