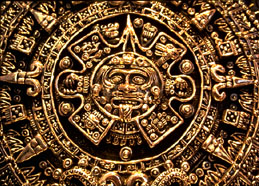 For the Aztecs, who lived in central Mexico, Tonatiuh was a Sun god. Aztecs believed that four suns had been created in four previous ages, and all of them had died at the end of each cosmic era. Tonatiuh was the fifth sun and the present era is still his. Tonatiuh was in charge of the Aztec Heaven called Tollan. Only dead warriors and women who died in childbirth could be received in Tollan.

Tonatiuh was responsible for supporting the universe. To prevent the end of the world, Aztecs believed it was essential to maintain the strength of the Sun god by offering him human sacrifices.