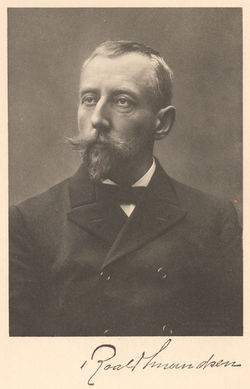 Roald Amundsen was a polar explorer who is famous for leading the first successful trip to the South Pole in 1910-1912. Amundsen was born in 1872 in Borge, Norway. His parents wanted him to study medicine, but he soon dropped out to go to sea, following his lifelong dream of exploration.

Amundsen took part in his first polar trip, the Belgian Antarctic Expedition, in 18971899. It was the first expedition to spend the winter in Antarctica. Boy, that must have been cold!

In 1903, Amundsen led the first trip to successfully cross the Northwest Passage between the Atlantic and Pacific Oceans. During this time Amundsen learned Arctic survival skills from the local people like how to use sled dogs.

The first attempt to reach the South pole failed. Finally on December 14, 1911, the team consisting of Amundsen and four other men, helped by 16 dogs, reached the South Pole. They beat

In his later years Amundsen continued exploring the Arctic by ship and plane. In 1926, Amundsen, took part in the first crossing of the Arctic in the airship Norge. Amundsen disappeared on June 18, 1928, while flying on a rescue mission looking for missing members of Nobile's crew, whose new airship had crashed while returning from the North Pole.