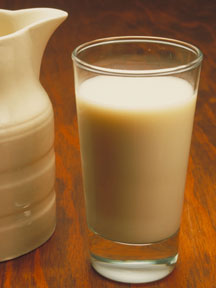 Milk is a type of liquid. A liquid takes on the shape of the container it is in. The milk has the same shape as the glass. Liquids have a surface. The surface of the milk is near the top of the glass where the milk meets the air above it.
Click on image for full size
Image courtesy of Corel Corporation.