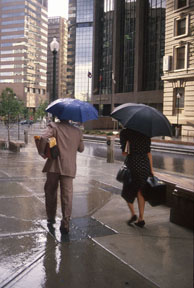 Rain in the city.
Click on image for full size
Copyright 2002 University Corporation for Atmospheric Research

The butterfly effect refers to how small things can have big consequences.

As an example, consider two different computer simulations of the path of a hurricane. Both of them start from some initial state, estimated from satellite and local measurements of wind speeds, temperature, etc. Let's say that these initial states are exactly the same except the temperature over Miami is one degree Celsius warmer in the second one. Although the results of these two simulations may be similar (hurricanes usually travel toward the north-west), the detailed paths may differ by hundreds of miles.

This is not a problem with the computer program - the real atmosphere is like this, as is any turbulent flow. The presence of rain in Colorado next Monday may depend on whether or not a butterfly in China decides to flap its wings today. The tiny amount of air moved (or not moved) by the butterfly may set off a chain reaction which could effect weather all over the Earth. This is where the butterfly effect gets its name.

The butterfly effect is why we have to use statistics to describe the weather and other turbulent flows. We can estimate the probability that it will rain in Colorado next Monday but we can't predict exactly where and when with 100% certainty. Weather forecasts will continue to improve but they will never be perfect. The atmosphere is just too complicated for that.

The butterfly effect is closely related to the concept of chaos. Chaos is commonly used to mean disorder but to a scientist it has a very precise meaning. Consider two small packets of fluid which initially lie close to one another. A flow is chaotic if the distance between these two fluid packets increases exponentially with time. A chaotic flow is very complicated but it is not entirely random.

The Kelvin scale is a temperature scale that is often used in astronomy and space science. You are probably more familiar with the Celsius (or Centigrade) scale, which is part of the metric system of measures,...more