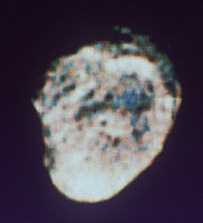 This is an image of Hyperion.
Click on image for full size
Image from: NASA

One of the main characteristics of Hyperion is its unusual shape. It is shaped like a soda/pop can. Another unusual feature of Hyperion is that it tumbles out of control as it orbits Saturn. As a small moon, details about the composition and structure of this moon are unknown.

The small moons are too small to be seen, so not much is known about their surface features or composition. With no knowledge of the composition, and no clues from the surface, little can be determined...more

Saturn has // Call the moon count function defined in the document head print_moon_count('saturn'); moons and a complex ring system. The moon Titan is one of the few moons in the solar system with a significant...more

This is an image of the Earth's moon, shown in the lower left, with the six much smaller icy moons of Saturn. The moons in order, starting from the top left are: Mimas, Enceladus, Tethys, Dione, Rhea,...more

Dione was discovered by G. Cassini in 1684. Dione is the 7th farthest moon from Saturn, with a standoff distance of 377,400 km. It is a small icy moon, lightly cratered, with wispy white streaks across...more

The Surface of Dione

The surface of Dione does not have many craters, which is an indication of changes to the surface in the past. Instead it has wispy white streaks similar to those found on Rhea extending for many kilometers...more

The Surface of Enceladus

The surface of Enceladus does not have many craters. Instead it has grooves similar to those found on Ganymede. These grooves extend for many kilometers over the surface. The presence of grooves indicates...more