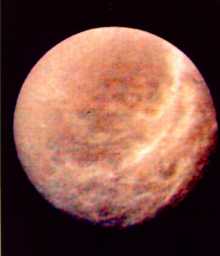 This is an image of Rhea.
Click on image for full size
NASA/JPL

Picture of Titan and the Medium-sized Moons of Saturn

Picture of the Medium-sized Moons of Saturn

The planet Saturn has a lot of moons. It has a total of moons!

Saturn also has huge rings which you can see in any picture of Saturn.

One of Saturn's moons is named Titan. Titan is a very big moon. Most moons don't have any air, but Titan does! The clouds on Titan are orange.

One of Saturn's moons looks like the "Death Star" from the Star Wars movies. It is called Mimas. Another moon has one white side and one black side. That odd moon is called Iapetus.

Some of Saturn's moons are medium-sized and some are very small. The names of the other medium-sized moons are Rhea, Dione, Tethys, Enceladus, Hyperion, Phoebe, Janus and Epimetheus.

Some old myths are about people and gods who have the same names as some of Saturn's moons.

Titan is a moon of the planet Saturn. It is Saturn's largest moon. Titan is the second largest moon in the whole Solar System. It is larger than Earth's moon. It is even larger than two planets - Mercury...more

Rhea was discovered by G. Cassini in 1672. Rhea is the 5th farthest moon from Saturn. Rhea is one of the icy moons. Rhea is about as wide as the state of California is long. Rhea is has many craters and...more

Dione was discovered by G. Cassini in 1684. Dione is the 7th farthest moon from Saturn. It is a small icy moon, lightly cratered, with white streaks across the surface. Dione is about as wide as the Oregon...more

Tethys was discovered by G. Cassini in 1684. Tethys is the 8th closest moon to Saturn. Tethys is one of the icy moons. It is about as wide as the length of the Oregon coast. Tethys is has a surface, with...more

Saturn has // Call the moon count function defined in the document head print_moon_count('saturn'); moons. Enceladus is one of them. Enceladus is the sixth biggest moon of Saturn. The diameter of Enceladus...more

Hyperion was discovered by W. Bond in 1848. Hyperion is the 3rd farthest moon from Saturn. Hyperion is about the size of a large county or small state. One of the main things about Hyperion is its unusual...more

This is an image of the Earth's moon, shown in the lower left, with the icy moons of Saturn. The moons in order, starting from the top left are: Mimas, Enceladus, Tethys, Dione, Rhea, and Iapetus. ...more