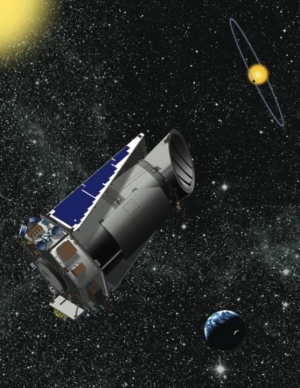 The Kepler mission will search for habitable planets, and determine their absolute sizes.
Click on image for full size
NASA

PlanetQuest - an alien view of a transit

In March 2009, NASA launched the Kepler satellite. This mission is designed to discover Earth-like planets around Sun-like stars. The satellite has a 0.95-m telescope with many digital cameras to monitor the brightness of more than 100,000 solar-type stars for 4-6 years.

Some of the planetary systems will be oriented so that the planets might pass in front of the host star. This will cause a brief decrease in the amount of light seen by the satellite. The timing and depth of such a "transit" tells us about the size of the planet compared to the star.

We will not always know the size of the star. So, the satellite will look more closely at 512 stars at a time, to detect pulsations. This will measure the true size of the star, and thus any planets.