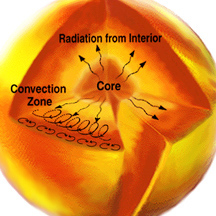 Movie of granulation on the Sun (9.1 Mb)

The convection zone is farther away from the core than the the radiative zone. At this point turbulent convective motions occur, similar to a pot of boiling water. The overturning (bubbling) motions inside the Sun are responsible for the granulation pattern seen on the Sun's surface.

Thermal physics is a field of science that deals with heat and temperature. When we study topics like global warming, the Earth's solid and liquid cores, and the way in which energy flows from the center...more

The Sun and the Solar Atmosphere

What are the "parts" of the Sun? The photosphere is the visible "surface" of the Sun. The three regions of the solar interior are the core, the radiative zone, and the uppermost convective...more

The Sun's radiative zone is the section of the solar interior between the innermost core and the outer convective zone. In the radiative zone, energy generated by nuclear fusion in the core moves outward...more

The convection zone is farther away from the core than the the radiative zone. At this point turbulent convective motions occur, similar to a pot of boiling water. The overturning (bubbling) motions inside...more