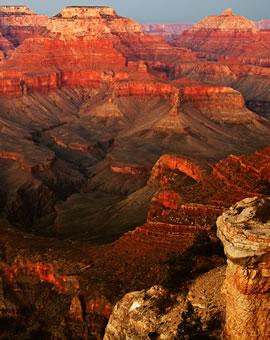 The Grand Canyon represents one of the most awe-inspiring landscapes in the United States. At the deepest parts of the canyon, nearly two-billion-year-old metamorphic rock is exposed. The Colorado River has cut through layers of colorful sedimentary rocks as the Colorado Plateau has uplifted.
Click on image for full size
Courtesy of the Earth Science Literacy Initiative

Big Idea 2.1
Earths rocks and other materials provide a record of its history. Earth scientists use the structure, sequence, and properties of rocks, sediments, and fossils to reconstruct events in Earths history. Decay rates of radioactive elements are the primary means of obtaining numerical ages of rocks and organic remains. Understanding geologic processes active in the modern world is crucial to interpreting Earths past.

Big Idea 2.2
Our Solar System formed from a vast cloud of gas and dust 4.6 billion years ago. Some of this gas and dust was the remains of the supernova explosion of a previous star; our bodies are therefore made of stardust. This age of 4.6 billion years is well established from the decay rates of radioactive elements found in meteorites and rocks from the Moon.

Big Idea 2.3
Earth formed from the accumulation of dust and gas, and multiple collisions of smaller planetary bodies. Driven by gravity, Earths metallic core formed as iron sank to the center. Rock surrounding the core was mostly molten early in Earths history, and slowly cooled to form Earths mantle and crust. The atoms of different elements combined to make minerals, which combined to make rocks. Earths ocean and atmosphere began to form more than 4 billion years ago from the rise of lighter materials out of the mantle.

Big Idea 2.4
Earths crust has two distinct types: continental and oceanic. Continental crust persists at Earths surface and can be billions of years old. Oceanic crust continuously forms and recycles back into the mantle; in the ocean, it is nowhere older than about 200 million years.

Big Idea 2.6
Life on Earth began more than 3.5 billion years ago. Fossils indicate that life began with single-celled organisms, which were the only life forms for billions of years. Humans (Homo sapiens) have existed for only a very small fraction (about 0.004%) of Earths history.

Big Idea 2.7
Over Earths vast history, both gradual and catastrophic processes have produced enormous changes. Super-continents formed and broke apart, the compositions of the atmosphere and ocean changed, sea level rose and fell, living species evolved and went extinct, ice sheets advanced and melted away, meteorites slammed into Earth, and mountains formed and eroded away.

Some materials are radioactive. They emit radiation. When an atom of a radioactive substance emits radiation, it is transformed to a new type of atom. This process is called radioactive decay. There are...more