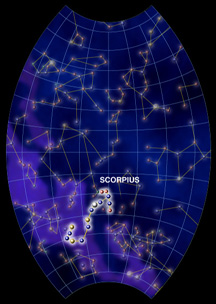 More than any other constellation, Scorpius resembles its given name. If you live in the northern hemisphere of the Earth, Scorpius crawls across the southern sky, close to the horizon. But if you live in the southern hemisphere, it passes high in the sky. The bright star Antares marks the heart of the arachnid, and its long curving tail trails to the south. The scorpion once had claws, but they were cut off by Julius Ceasar to form the constellation Libra.

Where stars are concerned, whatever you are looking for, you can probably find it in Scorpius. Antares is an unmistakable, brilliant red supergiant star at the heart of the scorpion. One of the largest, brightest globular clusters in the sky is in Scorpius.

The constellation Ophiuchus is the Serpent Bearer. This large constellation can be seen in the night sky from June through October. Although most of the stars are dim, Ophiuchus' teapot shape makes it...more