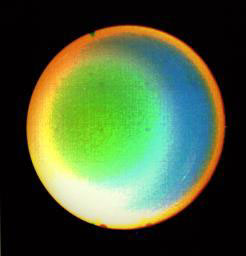 Motions of air in the atmosphere include wind. The major winds in the Uranian atmosphere are zonal winds, which have zones blowing west and belts flowing east.

Diffusion means the slow motion of molecules from one place to another. As solid as a pane of glass can seem, molecules of air can easily pass through the glass. This can readily be noticed on a cold winter...more