Uranus is tilted on its side. The South Pole is the bright area on the left in this picture.
Click on image for full size
Image courtesy of NASA, ESA, L. Sromovsky and P. Fry (University of Wisconsin), H. Hammel (Space Science Institute), and K. Rages (SETI Institute).

Uranus is the tilted planet. The axis through its North and South Poles is tilted by 98°. In other words, Uranus is lying on its side! That's not all - the magnetic field of Uranus is tilted, too. The planet's magnetic field is tilted 59°. A compass wouldn't be much help in finding North on Uranus!

Astronomers aren't sure why Uranus is tilted. One theory claims that an Earth-sized protoplanet might have smashed into Uranus when the Solar System was young and wild. Perhaps a collision like that knocked Uranus onto its side.

It takes Uranus 84 years to orbit the Sun once. The crazy tilt of Uranus, combined with its long year, make for some wacky seasons. Each season lasts more than 20 Earth-years. Spring (in the northern hemisphere of Uranus; Fall in the southern hemisphere) started on Uranus in December 2007. For the next 40 years the North Pole will be sunny all of the time, while the South Pole will be in darkness.

The South Pole of Uranus is covered by a light-colored "hood". Scientists think the hood is made of methane clouds and maybe a type of natural smog. There is not a hood over the North Pole. The South Pole had summertime for many years. Maybe heating from sunlight somehow caused the hood. Maybe a hood will form in the North, since it is becoming summertime there. 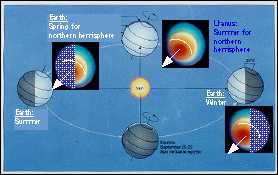 A Look at Uranus' Magnetosphere

The magnetosphere of Uranus is medium sized, but still much bigger than the Earth's. It holds all of Uranus' moons. It is probably made in the middle of the planet, and with ice, rather than with iron...more