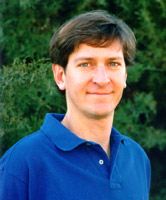 I joined the Windows to the Universe team in early January 2003. My primary role is to develop content about space for the site (especially for the Solar System, Space Missions, and Universe sections).

My professional background is in space science, educational technology, and the development of interactive multimedia software. I received my B.S. in astrophysics from Michigan State University in 1981; my Master's in aerospace engineering from the University of Maryland in 1988; and my Ph.D. in educational systems development from Michigan State in 1998. My Ph.D. dissertation topic was "World Wide Web Site Visitor Studies Techniques Using Server Log File Data".

I worked briefly as a computer programmer/analyst at NASA's Goddard Space Flight Center in 1987-1988 in support of satellite communications. For several years (1990-1996), I helped research and develop new multimedia software technologies at the Communications Technology Lab at Michigan State. One of my main projects there was the development of the Microbe Zoo web site and CD-ROM, which provides insights into the worlds of microbiology to "kids of all ages". I helped develop numerous online courses, mostly related to science and engineering topics, while working for Michigan State's Virtual University from 1997-2001. In 2001-2002 I worked for TERC developing web-based interactives about Earth Science for their Exploring Earth project, a companion web site to the high school textbook of the same name.

I'm a hardcore, four-season bicycle commuter and a two-time world champion Ultimate Frisbee player. I like to camp and hike and ski and generally get outside a lot.

The Space Science themes that I personally find most interesting these days include extrasolar planets, astrobiology, spacecraft and spaceflight technologies (especially the gradual buildup of infrastructure to enable the permanent presence of humans in space and on other worlds), and the ongoing robotic exploration of our Solar System.

Welcome to the online resources for our NSTA workshop Changing Climate, Changing World. This workshop provides information and data-rich classroom activities about the impacts that climate change is having...more