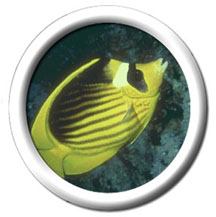 This is just one species of butterflyfish. Isn't it pretty?!
Click on image for full size
Windows Original, adapted from Corel Photography

There are several species of butterflyfish. These colorful, bony fish are most often found near coral reefs. Their meals usually consist of worms, crustaceans and the fleshy part of corals called polyps. The rest are omnivorous, which means they eat animals as well as plants, such as algae.

Butterflyfish come in sizes between 6 and 12 inches, and usually have very bright colors. The Golden-striped Butterflyfish glows a beautiful yellow, almost like a tiny Sun in the water. The Ornate Butterflyfish is truly remarkable. Most of its body is a light blue, with bright orange stripes flaming across.

This special family is easily spotted in the water because of its shape and beauty. Butterflyfish are rather flat and oval-shaped. A short 'snout' sticks out at one end, while a fan-shaped tail stems out from the back. Butterflyfish make great pets.