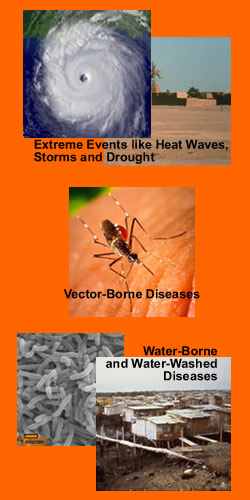 There is evidence that recent climate change has already begun to have an impact on human health. For example, the ticks that carry Lyme disease are now found in parts of Canada that were, not long ago, thought to be too far north for the ticks to survive. And in Bolivia, where changing climate has caused more rainfall, the number of mosquitoes that carry Dengue fever has soared. There have also been changes in plant distributions and types of pollen such as ragweed that cause seasonal allergies. Data also suggest that the number of heat wave related deaths is on the rise.

Scientists project that as Earths climate continues to warm the impact on human health will be more pronounced over the next century. More people will be affected by the hazards associated with events such as heat waves, storms, floods, fires and drought. Projected climate change will lead to malnutrition in regions that are increasingly affected by drought. The range of infectious disease vectors will continue to change. Air quality will likely continue to deteriorate in urban areas, assuming current emissions levels continue, causing more cardio-respiratory problems. Changes over the next few decades will be modest. Changes after about the middle of the century will be more pronounced.

There may be some benefits in terms of human health, too, including fewer deaths from extreme cold and the ability to grow crops at higher latitudes. However, this will likely be minor as compared with the negative impacts on human health.

What is somewhat reassuring is that in some cases the negative impacts on human health can be lessened if appropriate infrastructure and systems are put in place. In other words, in some ways we can adapt. For example, the French government recently put a system in place to warn people of heat wave danger and to make sure the elderly, who are particularly vulnerable, are given special care in the event of a heat wave event. Improved evacuation plans for hurricane prone regions, improved water treatment and sewer facilities, and other improvements can make a difference for human health. However, the IPCC Forth Assessment Report warns that even high-income countries are currently not well prepared to cope with extreme weather events and that economic development can not alone insulate humans from disease and injury due to climate change.

And what is somewhat disconcerting is that as climate continues to change, some of the people who are at the most risk of negative health impacts are those who have the least resources to help improve the situation. Adverse health impacts will be greatest in low-income countries. Africa, a continent where substantial health concerns exist regardless of climate change and where 46% of the population lives on less than one US dollar per day, is expected to be particularly hard hit in terms of human health as climate continues to warm. Currently, 70% of cases of the most dangerous strain of malaria occur in Africa and that fraction will rise substantially in the future according to World Bank projections. In addition, regardless of nationality, certain populations are more vulnerable than others. The urban poor, the very old and the very young, traditional societies, subsistence farmers, and coastal populations are at the highest risk of health problems.

For this section of the course we will focus on three aspects of climate change that can impact human heath. These three are listed below along with links to each reading:
It is important to remember that, while the focus of this section of the course is on the impacts on human health, climate change also has diverse impacts on other parts of ecosystems and environments. Next week we will focus on some of the other, non-human, ecological impacts.

Note: Except where indicated the source of the data in the climate and health section of this course comes from Chapter 8 of Working Group II report from the IPCC Forth Assessment Report. You can take a look at Chapter 8: Human Health (pdf) for yourself on the IPCC web site.