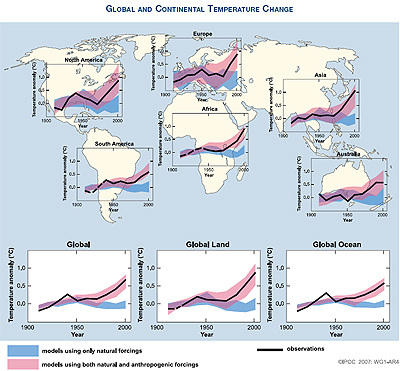 The IPCC is a group of hundreds of experts from more than 100 countries. They work at universities, research centers, businesses, and environmental organizations. Together, to build the IPCC reports, they study our current understanding of human-induced climate change  its risks, possible impacts, and options for how to adapt.
The IPCC does not do research about climate change. Instead, the Panel produces reports that explain what we as a global community know about climate change. These reports are based on all the available scientific literature and as such they are like the worlds most extensive book reports.

The reports of the IPCC are used by government officials in countries around the world as they make policies about how their countries will tackle problems like greenhouse gas emissions, climate change, and other global changes. The reports are also read by scientists, other experts, students, and anyone else who wants to better understand what we know about Earths climate system.

In 1988, as it started to become clear that human activities could have a worldwide and lasting impact on our planet, the IPCC was formed by the World Meteorological Organization (WMO) and the United Nations Environment Programme (UNEP). The WMO and UNEP recognized that there was a need to help people understand how the Earths climate system works so that people could make informed decisions about how they would live on the planet. Since our understanding of the Earths climate is growing broader each year, there is an ongoing need to keep people informed about the current state of knowledge about Earths climate.

In October 2007 the IPCC was awarded the Nobel Peace Prize jointly with Former US Vice President Al Gore for their efforts to build up and disseminate greater knowledge about man-made climate change, and to lay the foundations for the measures that are needed to counteract such change, announced Professor Ole Danbolt Mjøs, Chairman of the Norwegian Nobel Committee on October 12, 2007.

The most recent reports are available online at the IPCC website.

Flying twin-engine light aircraft the equivalent of several trips around the globe and establishing a network of seismic instruments across an area the size of Texas, a U.S.-led, international team of...more