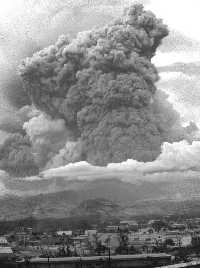 Volcanic eruptions come in many different forms. Shield volcanoes typically spew lava accompanied only by hot gases. These lavas flow slowly down the mountain with speeds of 15 miles per hour or slower. Composite volcanoes can put forth lava accompanied by clouds of ash, bombs, lava fragments, crystallized, glassy material, as well as hot gases. In some eruptions, ash and lava is buoyied by hot vapors and pours down the slopes of a volcano very rapidly, with speeds up to 100 miles per hour. This is called pyroclastic flow. In other cases hot material from the volcano can melt snow and ice at the volcano summit and the whole mass of mud and lava can sweep rapidly down the mountain, destroying everything in its path. This type of flow is called a lahar.

Because eruptions release significant amounts of gas into the atmosphere from the deep interior of the earth, volcanic eruptions are considered to add to the world's inventory of atmospheric gases. Moreover, if an eruptive column of gases and ash reaches the stratosphere, it can have a significant affect on the weather.

Lava is the word for magma (molten rock) which is extruded onto the surface of the Earth. Upon being released from the magma chamber and cooling, lava solidifies into rock. The term lava is used to describe...more

Pyroclastic material is another name for a cloud of ash, lava fragments carried through the air, and vapor. Such a flow is usually *very* hot, and moves *rapidly* under it's own power due to buoyancy provided...more

Lahars are mudslides caused by the mixing of volcanic ash and debris with water. They can occur when the heat from a volcano melts snow and ice on the volcano's summit, or if an eruption disturbs a crater...more

Mt. Pelee is not a very tall volcano, in fact it is an example of what is called a "lava dome". An extremely destructive eruption of Mount Pelee occurred in 1902. The coastal town of St. Pierre, about...more

One of the most powerful volcanic explosions in the history of the world occured at Krakatoa in the last century. Krakatoa was formerly a volcanic island found in the strait between Java and Sumatra. It...more

Mt. Mazama was once among a cluster of Pleistocene stratovolcanoes stretching along the Washington and Oregon coast. This cluster of volcanoes includes Mt. Hood, Mt. Rainier, and Mt. St. Helens. The magma...more