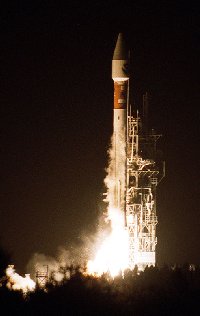 The GOES-M satellite was launched this morning from Cape Canaveral at 3:23 a.m. EDT. This new satellite will track thunderstorms, hurricanes, floods and other severe weather on Earth. It also carries the most advanced instrument for detecting storms outside the Earth's atmosphere.

The Solar X-ray Imager (SXI) instrument will take a full picture of the Sun once every minute. NOAA and the U.S. Air Force will examine the images looking for solar flares, coronal mass ejections, coronal holes and active regions. These solar features can cause geomagnetic storms which can endanger astronauts, fry satellite electronics, surge power grids here on Earth, and disrupt long-distant radio communications. The SXI instrument is the most advanced instrument of its kind and it will help scientists forecast this space weather protecting billions of dollars worth of commercial and government assets in space and on the ground. "The SXI will provide the kind of improvements in space weather forecasting that satellite imagery did for tracking hurricanes," said Steven Hill, SXI Program Manager at NOAA's Space Environment Center in Boulder, CO.

GOES-M will be stored in orbit until it is needed to replace one of the current meteorological GOES 8 or GOES 10 satellites. GOES 8 currently surveys the east coast of the U.S. while GOES 10 constantly surveys the west coast of the U.S. When GOES-M reaches geostationary orbit 17 days from now, it will be renamed GOES 12. Geostationary orbit is also known as geosynchronous orbit.

This GOES satellite represents a joint effort between NOAA (National Oceanic and Atmospheric Administration) and NASA (National Aeronautics and Space Administration). NASA's Goddard Space Flight Center managed the design, development and launch of the spacecraft. NASA's Kennedy Space Center in Florida was responsible for government oversight of launch operations and the management of countdown activities. After the satellite completes on-orbit checkout about three months from now, NOAA will assume responsibility for command and control, data receipt, and product generation and distribution.