Scientists are sending tiny airplanes buzzing in the sky to find out how air pollution can impact weather, climate, and global warming.

The tiny airplanes look like regular planes but they have only a wing span of eight feet and weigh less than 50 pounds. They do not have a pilot and are remote-controlled. But these planes are not toys. They are important research tools.

The team of scientists filled the planes with tiny instruments that measure different parts of the atmosphere. Then they flew the planes into clouds of air pollutants called brown clouds and the instruments collected data.

Brown clouds are a haze of tiny particles and water droplets of cumulus clouds. Sometimes they form naturally, such as during forest fires. But many brown clouds are made by people. The smoke from power plants, cars, trucks, and factories all adds to brown clouds. The pollution travels high in the atmosphere and is carried by the wind.

They discovered that the increase in air pollution has shaded the Earth. More sunlight is now reflected back into space because there is more air pollution. So air pollution may hide some of the impact of global warming by keeping the planet somewhat cooler. As air pollution, which causes dangerous health problems, is reduced, our planet will get even warmer.

Cumulus clouds belong to the Clouds with Vertical Growth group. They are puffy white or light gray clouds that look like floating cotton balls. Cumulus clouds have sharp outlines and a flat base. Seeing...more 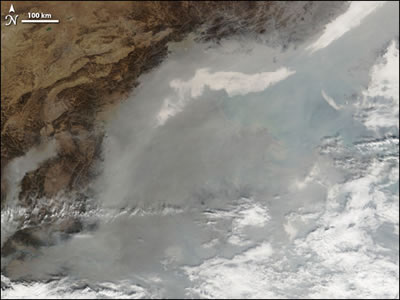 During the Summer Olympics in Beijing, China, scientists have a once-in-a-lifetime opportunity to observe what happens in the atmosphere a heavily populated part of the world cuts back on everyday industrial...more