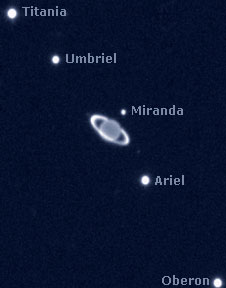 Astronomers have discovered new moons orbiting the planets Uranus and Neptune. Counting the new moons, Uranus now has 27 moons that we know about. Neptune has 13 that have been found so far. All of the newfound moons are small, having diameters less than 100 km (60 miles).

Mark Showalter of Stanford University and NASA's Ames Research Center and Jack Lissauer of Ames discovered two new moons of Uranus. Those moons have been given temporary names: S/2003 U1 and S/2003 U2. The moons were found in pictures taken by the Hubble Space Telescope. Uranus has five large moons named Ariel, Miranda, Oberon, Titania and Umbriel. S/2003 U1 and S/2003 U2 are closer to Uranus than all of the large moons.

Scott Sheppard and David Jewitt discovered two more moons of Uranus. Those moons are called S/2003 U3 and S/2001 U2 for now. Sheppard and Jewitt used a telescope on top of a volcano in Hawaii to find these moons. S/2001 U2 has a big orbit and takes almost 8 years to go around Uranus!

Astronomers also found two new moons orbiting Neptune. Matthew Holman and B. Gladman discovered S/2002 N4. Jewitt, Sheppard and Jan Kleyna discovered S/2003 N1. These moons orbit very far from Neptune. They are farther away from their "home" planet than any other moon that has been found so far. They take about 25 years to go around Neptune once!

Some of the moons had been seen before in the last few years. To figure out the orbit of a moon, astronomers need to see it a few times to know how it moves. They don't count a moon as "discovered" until they are sure that it orbits a planet.