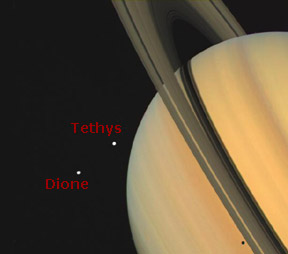 Twelve new moons of Jupiter were discovered earlier this year. The last time astronomers found new moons of Saturn was December 2000. Scientists think there are many more small moons that haven't been found yet. A spacecraft called Cassini is on its way to Saturn. When it gets there, it may find more moons around Saturn!

In October 2000, a group of astronomers led by Brett Gladman of France's Observatoire de la Cote d'Azur and JJ Kavelaars of McMaster University in Canada announced their discovery of 4 new moons of Saturn....more

The gas giant planet Saturn has a large group of // Call the moon count function defined in the document head print_moon_count('saturn'); moons. It also has the largest, most complex, and best-known ring...more