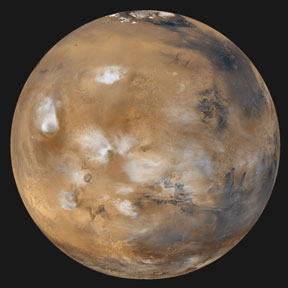 Even at oppositon, Mars won't look this big from Earth. This picture was taken by a spacecraft.
Click on image for full size
Image courtesy NASA/JPL.

Movie of the orbits of Earth and Mars

The planet Mars is closer to Earth than normal right now. On October 30, 2005, the two planets will be very close to each other. They will be about 69 million km (43 million miles) apart. Mars will look like a very bright red star in the sky then.

Earth moves around the Sun more quickly than Mars. Every 26 months, Earth "laps" Mars on "the inside lane". When Earth passes Mars, astronomers call the event an "opposition". During an opposition, the Sun, Earth, and Mars form a straight line with Earth in the middle. Viewed from Earth, Mars is on the opposite side of the sky from the Sun. Opposition is the time in each 26-month cycle when Mars and Earth are closest together. Mars was even closer to Earth in August 2003.

Check out this movie of the orbits of Earth and Mars to see where the planets are right now.

The distance between Earth and Mars is not always the same at opposition. The orbit of Mars is an oval, not a circle. Earth can be closer or further from Mars at opposition, depending on where in Mars's orbit the Red Planet is when Earth passes it. This time around the two planets get really, really close together! Since Mars will be so close during this opposition, it will be very bright in the sky and will look larger than usual through a telescope.

The planet Mars is closer to Earth than normal right now. On October 30, 2005, the two planets will be very close to each other. They will be about 69 million km (43 million miles) apart. Mars will look...more

Scientists at the University of Colorado at Boulder found evidence supporting a theory that salt is present on Io. Io is one of Jupiter's many moons. Recent observations from the National Science Foundation's...more