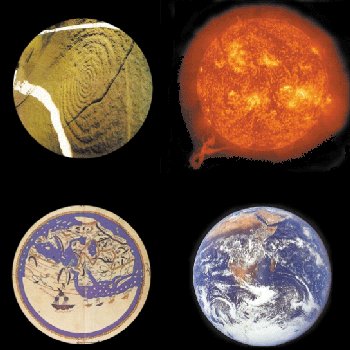 March 20, 2005 is the Vernal Equinox (the "first day" of Spring in the Northern Hemisphere or the "first day" of Fall in the Southern Hemisphere). It is also Sun-Earth Day! Sun-Earth Day is a celebration of the Sun, the space around the Earth (geospace), and how all of it affects life on our planet. In classrooms, museums, planetariums, and at NASA centers, we plan to have a blast sharing stories, images, and activities related to the Sun-Earth connections in our Solar System.

NASA’s Sun-Earth Connection Education Forum provides lots of information about Sun-Earth Day. This year NASA's theme for Sun-Earth Day is "Ancient Observatories: Timeless Knowledge", which provides a look at observations of the Sun by many different cultures throughout history.

Please see the links below for more information on how to participate in Sun-Earth Day.

The planet Mars is closer to Earth than normal right now. On October 30, 2005, the two planets will be very close to each other. They will be about 69 million km (43 million miles) apart. Mars will look...more

Scientists at the University of Colorado at Boulder found evidence supporting a theory that salt is present on Io. Io is one of Jupiter's many moons. Recent observations from the National Science Foundation's...more

Global warming is raising temperatures of arctic regions much faster than other areas on Earth. This rapid warming is causing the village of Shishmaref, Alaska to wear away slowly into the sea. Shishmaref,...more

Twenty years after the making, E.T. the extraterrestrial is still entertaining the world. Portrayed as a lovable, happy friend, E.T. stole the hearts of millions over the years. However, to this day scientists...more