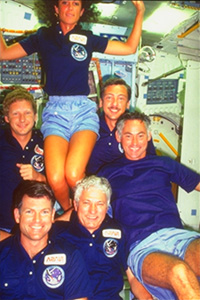 One of the greatest wonders of space flight is that people and objects float in space. The world is enticed by this experience of "zero-gravity" or "weightlessness". Lately, there has been a push by scientists to replace these words with the term "microgravity".

A spacecraft that is orbiting the Earth is not beyond the Earth's gravity (in fact, the Earth's gravity holds it in orbit). So the term zero-gravity is a bit misleading. People and objects aren't really weightless when in space. Instead, they are in a state of free-fall around the Earth. This freefall creates a microgravity environment where things float.

One way to simulate microgravity on Earth is to simulate this freefall. A turbojet owned by NASA does just this. Through a series of manuevers, brief periods (20 seconds) of simulated weightlessness are achieved. NASA uses this turbojet to train astronauts for microgravity tasks and to prepare them for the sensations they will encounter while in orbit.

The nickname of the turbojet is the "Vomit Comet". (Can you guess why?) Due to numerous transitions in and out of weightlessness, most first-time passengers experience motion sickness to some degree. Needless to say, losing one's breakfast in microgravity can get very messy!