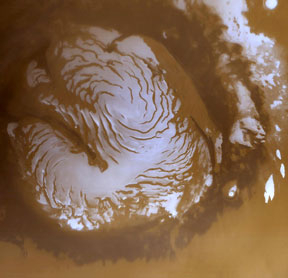 This image shows the northern polar ice cap on Mars. White areas are primarily water ice that exists throughout the year. Light brown areas near the ice are the "polar layered terrain", a mix of layers of ice and dust. A darker brown band of dune fields surrounds the polar cap. A huge canyon, Chasma Boreale, slices through the ice cap - from upper left towards lower right, starting at the 10 o'clock position, in this image. The northern ice cap is about 1,100 km (680 miles) across. This image, captured by the Mars Global Surveyor orbiter in March 1999, shows the North Pole during the Martian summer season.
Click on image for full size
Image courtesy of NASA/JPL/ Malin Space Science Systems.

The North Polar Regions of Mars

The Martian ionosphere is a layer of gas composed of ions and electrons that extends from about 75 miles up to several hundred miles up above the surface. The layer is shown schematically by the shaded...more