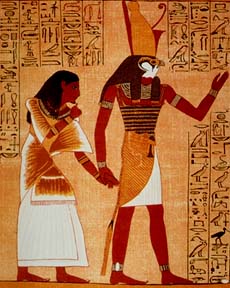 Horus was a fierce and proud ancient Egyptian god. He was the son of Osiris, the god of air and the Earth, and the goddess Isis. Osiris was killed by his brother Seth in order to seize the throne. To protect his power, Seth tried to prevent Osiris from having any children. However, Isis hid her pregnancy from Seth and saved her child.

Horus grew up in secrecy determined to avenge the death of his father. When he grew up, Horus challenged Seth. The violent fight, where Horus lost one eye, lasted until the assembly of the gods decided to intervene and declare the throne to Horus. Seth was ordered to replace Horus' eye. But to honor the memory of Osiris, Horus offered the recovered falcon-eye to his father, and covered his wound with a divine serpent, Uraeus. Ever since, the serpent has been considered the emblem of the Egyptian pharaohs.

At last, Osiris transferred his power to his son Horus, and retired to the world of the blessed to become an underworld god. Horus became the new king of Egypt, ruling under the sun-god Re.