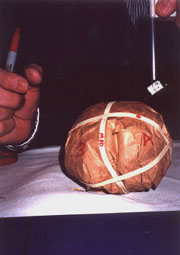 Overview: Students will build a simulated planet with a magnetic core. The core will consist of a battery with "donut" magnets taped onto the ends, creating the equivalent of a larger bar magnet. The core will be wrapped in a crumpled paper bag (the bulk of the "planet"). The bag will be held shut by rubber bands, which will also serve as latitude and longitude lines dividing the "planet" into eight segments. The students will use a magnetometer to determine which octant of the planet the north and south magnet poles are beneath. They will record this info, then swap planets with other groups so they can repeat the "finding the poles" process on several different "planets".

Refer to our Terrabagga photos page to see pictures of the stages of this procedure.

This activity requires use of a magnetometer. See the Magnetometer Activity link in the "Related activities" section below for instructions about building a simple, inexpensive magnetometer.

Have students work in groups of 2-3 for this activity.

The instructions to students for this activity are written at a level that may not be suitable for younger students. If you teach elementary-aged students, you may need to revise the instructions or provide them verbally to your students. Also, teachers of younger students may wish to revise this activity by building the Terrabaggas for the students and simply having the students test the pre-assembled planets to determine the directions of their magnetic fields.

The dead D-size batteries in this lesson are used for their steel casing. Most recycling centers that have battery recycling will gladly let you take a bagful of dead D batteries home with you for free. The battery with the donut magnets taped on create the "bar magnet" found in the core of many of the planets and moons. The donut magnets used for this activity can be found at Radio Shack stores across the nation. These magnets have a definite north and south pole - with the top face of the magnet being one polarity and the bottom face of the magnet being the opposite polarity.!