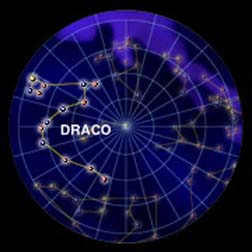 The constellation, Draco the dragon.
Click on image for full size
Chris Gleason, Windows to the Universe

Learn the mythology behind Draco, the dragon

The easiest way to spot Draco is by finding his head. It consists of four stars in a trapezoid, burning brightly just north of Hercules. From there, the tail slithers through the sky, ending between the Big and Little Dippers. The end of the constellation is held by Thuban, which was the pole star over 4,000 years ago.

Several galaxies and even one nebula is found within the constellation. The Cat's Eye Nebula is a favorite among astronomers.

Many myths revolve around this chaotic dragon. It is said in Greek myth that a serpent named Ladon guarded the golden apple tree. One of the twelve labors of Hercules was to steal apples from this well-guarded tree.

Draco the dragon is famous throughout mythology. This great beast was especially present in greek myth. One of the more popular stories involves Heracles and the twelve labors. Gaia gave Hera a golden...more

Draco the dragon is a circumpolar constellation, which means it revolves around the North pole. It can be seen all year round. Draco is only present in the Northern Hemisphere, so those living in the...more