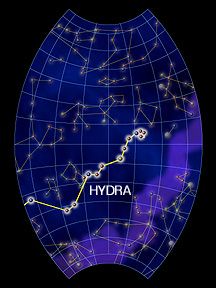 Hydra is the longest constellation in the sky and is also the largest in terms of area. It is so long that it takes more than six hours to rise completely. Along its northern side, we can observe the zodiacal signs of Cancer, Leo, Virgo and Libra.

The stars in the serpent's head appear to be at the same distance but they are really very far away from each other. The northernmost of the six stars in the head of the serpent, Epsilon Hydrae, is a quintuple star - a system of five stars. Alphard (Arabic for "the solitary one") is Hydra's brightest star.

In Greek mythology, Hercules slew Hydra, a horrible serpent with many heads that grew back as soon as they were cut off. Killing the Hydra was one of Hercules' twelve labors, during which he also defeated Leo, the lion, and Draco, the dragon.

The constellation Virgo is known as The Maiden. The constellation represents almost every famous and powerful female in mythology, including Athena, Artemis, Persephone and Demeter. She is usually carrying...more

A long time ago, Greek people believed that a long strip of stars was really an image of a gigantic serpent known as the Hydra. The people of Lerna were terrorized by this serpent--a horrifying beast with...more