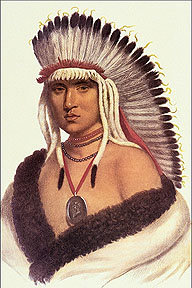 The sky and the stars mattered a lot to the Skidi Band of the Pawnee tribe. They thought the stars were gods who acted in the lives of humans. The gods had a certain ranking:

The Skidi Band decided when to hold certain events by looking at where the stars were in the sky. In fact, the Pawnee drew star charts a long time ago.

The Pawnee people watched the sky and the stars a lot because their mythology and their social and religious practices depended on it.