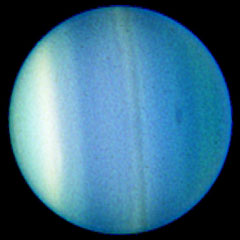 Uranus is tilted on its side. The South Pole is on the left in this image. A bright "hood" of methane clouds covers the South Pole.
Click on image for full size
Image courtesy of NASA, ESA, L. Sromovsky and P. Fry (University of Wisconsin), H. Hammel (Space Science Institute), and K. Rages (SETI Institute).

Uranus is the tilted planet. Its spin axis, which defines the locations of its North and South Poles, is tilted almost 98Â° away from the "upright" direction perpendicular to its orbital plane. In other words, Uranus is lying on its side! The magnetic field of Uranus is out of kilter, too. The planet's magnetic field is itself tilted 59Â° away from the spin axis. A compass would not be much help in finding North on Uranus!

Astronomers aren't certain why Uranus is so severely tilted. The leading theory posits that an Earth-sized protoplanet may have collided with Uranus during the early, tumultuous years of the Solar System, knocking Uranus onto its side. Many scientists believe a similar collision may have created Earth's Moon several billion years ago.

The crazy tilt and long orbital period (84 years) of Uranus make for some wacky seasons. The planet was at its equinox in December 2007; for the next two decades it will be summertime in the Northern Hemisphere and winter in the South. The North Pole will be bathed in continuous sunlight for about 40 years, while the South Pole will be dark for four decades. The next solstice on Uranus will be in 2028. Remarkably, on average over the course of a Uranian year, the poles receive more solar energy than the planet's equatorial regions!

Strange seasons and uneven lighting generate odd atmospheric phenomena on Uranus. The planet's South Pole is covered by a bright "hood" of methane clouds and possibly some sort of hydrocarbon smog. The polar hood is surrounded by an even brighter "collar" that circles the planet near 45Â° South latitude. The North Pole does not have a similar "hood" or "collar". Astronomers think these features near the South Pole are associated with atmospheric heating during that pole's long summer, which ended just recently.

The magnetic poles of Uranus are thoroughly out of alignment with the planet's geographic poles. The dipole component of the Uranian magnetic field is tilted 59Â° away from the planet's spin axis. It is also offset from the center of Uranus by about one-third of the planet's radius.

Smog is a type of air pollution. Smog is a mixture of smoke and fog, hence the name (SMoke + fOG = SMOG). Victorian-era London was famous for its thick smogs, which resulted from the city's frequent, naturally...more