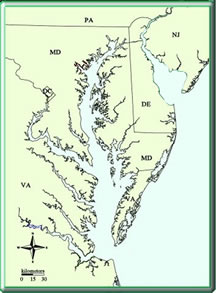 Have you ever been swimming in the ocean? If you got any of the water in your mouth, you'll know that that water is SALTY! Ocean water is salt water. Water found in rivers, lakes, creeks, and streams is called fresh water.

There is a special name for the environment where salt water and fresh water mix. The name is estuary.

A good example of an estuary is a salt marsh that is near the coast. Another example is when a river feeds directly into the ocean. The biggest estuary in the United States is Chesapeake Bay.

All kinds of plants and animals live in estuaries! And so it's important to protect these estuaries from pollution or damage.