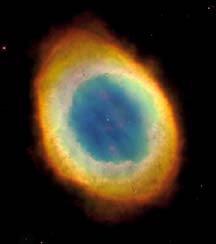 This is an image of the Ring Nebula, looking as if from the end of a barrel.
Click on image for full size
Hubble Space Telescope image courtesy of STScI

See images of other nebula

Scientists used the Hubble Space Telescope to look at an old nebula. It's called the Ring Nebula. They used to think that it was shaped like a ring but it isn't. Pictures from the HST show that it's really a tube. Gas escaped from a dying star and formed the nebula. The gas first formed a ring. It then began moving above and below the ring to form the tube we can now see.

NASA cut its newest project, which would have sent a probe to a comet. Sometime in 2005, the comet may have landed on comet Tempel 1. Now, there is no more money to continue the mission. NASA spent a...more