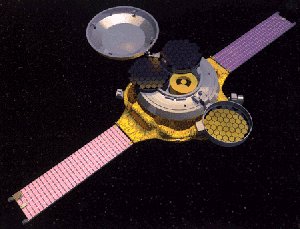 This is an artist's rendition of the Genesis spacecraft.
Click on image for full size
Courtesy of NASA

On July 30, 2001, NASA is set to launch the next of its robotic space missions: The Genesis mission. The Genesis spacecraft will orbit the Sun and collect particles that make up the solar wind.

These particles will be taken back to earth by the spacecraft, then passed to a helicopter in mid-air because they are too fragile for a parachute landing. Scientists will then study these particles to see what exactly the solar wind is made of. Once they know this, they will be able to understand more about what the Sun is made of and how the Sun was born! Cool!