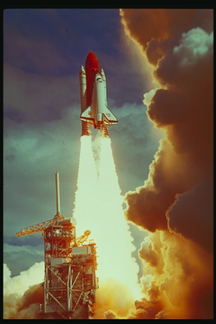 The Space Shuttle Discovery launch date has been changed. It was going to launch on May 20, 1999. The shuttle will wait at least another week before lifting off.

A hail storm caused damage to the fuel tank. The damage must be fixed before lift off.

Have you ever seen the Space Shuttle lift off? (If not, there is a picture on the left!)