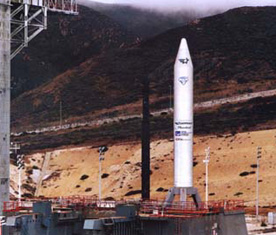 The Lunar Prospector was suppose to be launched last night. But things don't always turn out as we want them to! The radar that is needed to track the Prospector broke yesterday so the launch was delayed.

NASA hopes to fix the radar so that the Prospector can be launched tonight. Launch is planned for 9:28 p.m. EST. Stay tuned!

The Lunar Prospector will be launched on January 5, 1998. The spacecraft will orbit the Moon, but won't land. The Prospector's mission will be an exciting one. The main goal of the Prospector is to make...more