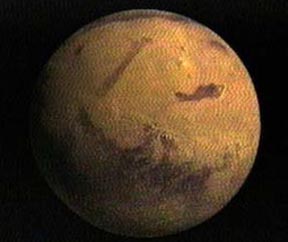 Scientists have made a detailed map of Mars shaped like the planet! You can actually hold the map in your hand because it is 3-D. The Mars Global Surveyor measured the height of the surface at millions of different points. Each point was used to make a globe of Mars!

Scientists found neat stuff like a huge basin that could hold Mt. Everest. Mt. Everest is the biggest mountain on Earth! They also found that the lower half of Mars is higher than the upper half.

This means that most of the water drained into the northern half of Mars. This happened a long time ago, so the water has gone away!