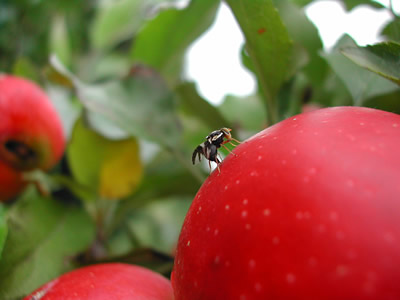 Scientists have discovered a new species of fruit fly and wasp. The two species are related and has to do with the introduction of apples in the United States almost 400 years ago.

For almost 250 years after the introduction of apples to North America, insects called hawthorn flies, (with the scientific name Rhagoletis pomonella), did what they had always done and met on the small, red fruit of hawthorn trees to mate and lay eggs. Then, in the mid-1800s, some of these "hawthorn flies" began to mate and lay eggs on apples instead. The flies that were attracted to apples eventually became different from the flies attracted to hawthorns. The wasps that live on the flies' larve also became genetically different.